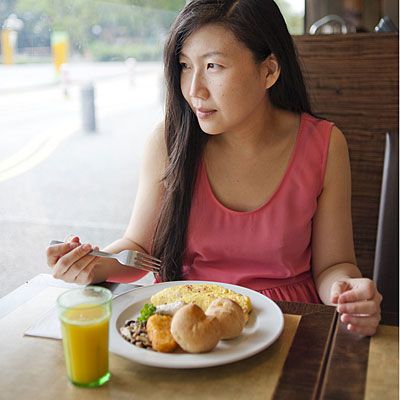 Energy, and How to Get It

For months, during the main pandemic stretch, I’d get inexplicably tired in the afternoon, as though vital organs and muscles had turned to Styrofoam. Just sitting in front of a computer screen, in sweatpants and socks, left me drained. It seemed ridiculous to be grumbling about fatigue when so many people were suffering through so much more. But we feel how we feel.

Nuke a cup of cold coffee, take a walk around the block: the standard tactics usually did the trick. But one advantage, or disadvantage, of working from home is the proximity of a bed. Now and then, you surrender. These midafternoon doldrums weren’t entirely unfamiliar. Even back in the office years, with editors on the prowl, I learned to sneak the occasional catnap under my desk, alert as a zebra to the telltale footfall of a consequential approach. At home, though, you could power all the way down.

Still, the ebb, lately, had become acute, and hard to account for. By the standards of my younger years, I was burning the candle at neither end. Could one attribute it to the wine the night before, the cookies, the fitful and abbreviated sleep, the boomerang effect of the morning’s caffeine and carbs, a sedentary profession, middle age? That will be a yes. And yet the mind roamed: Covid? Lyme? Diabetes? Cancer? It’s no HIPAA violation to reveal that, as various checkups determined, none of those pertained. So, embrace it. A recent headline in the Guardian: “Extravagant eye bags: How extreme exhaustion became this year’s hottest look.”

It was just a question of energy. The endurance athlete, running perilously low on fuel, is said to hit the wall, or bonk. Cyclists call this feeling “the man with the hammer.” Applying the parlance to the Sitzfleisch life, I told myself that I was bonking. At hour five in the desk chair, the document onscreen looked like a winding road toward a mountain pass. The man in the sweatpants had met the man with the mattress.

All of us, except for the superheroes and the ultra-sloths, know people who have more energy than we do, and plenty who have less. We may admire or envy or even pity the tireless project jugglers, the ravenous multidisciplinarians, the serial circulators of rooms, the conference hoppers, the calendar maximizers, the predawn cross-trainers and kickboxers. How does she do it? On the flip side, there are the oversleepers, the homebodies, the spurners of invitations and opportunities, the dispensers of excuses. Come on, man! It’s hard to measure success, if you want to avoid making it about money or power or credentials, but, as one stumbles through the landscape of careers and outputs and reputations, one sees, again and again, that the standouts tend to be the people who possess seemingly boundless reserves of mental and physical fuel. Entrepreneurs, athletes, artists, politicians: it can seem that energy, more than talent or luck, results in extraordinary outcomes. Why do some people have it and others not? What does one have to do to get more?

Energy is both biochemical and psychophysical, vaguely delineated, widely misunderstood, elusive as grace. You know it when you got it, and even more when you don’t. This is the enthusiasm and vigor you feel inside yourself, the kind you might call chi, after the ancient Chinese life force or the pronouncements of the storefront acupuncturist. The kind you seek to instill by drinking Red Bull or Monster, plunging into an ice bath, or taking psychostimulants, like Ritalin or Adderall or Provigil. Nootropics. Smart pills. CDP-choline, L-theanine, creatine monohydrate, Bacopa monnieri, huperzine A, vinpocetine. Acetyl-CoA, lipoic acid, arginine, ashwagandha, B complex, carnitine, CoQ10, iodine, iron, magnesium, niacin, riboflavin, ribose, thiamin, Vitamins C, E, and K. Biohackers microdose psychedelics, stick ozone tubes up their butts, or pay fifteen hundred dollars for a seven-hundred-and-fifty-milligram dose of NAD IV. Energy is why we’ve made a virtual religion of 1, 3, 7-trimethylxanthine, otherwise known as caffeine.

“Society has progressively increased its demands on us, and with that, therefore, our expectations of what we can or should do,” Maurizio Fava, the chief of the department of psychiatry at Mass General, told me. “This has led to a quest for greater ‘energy.’ ‘How can I do more? Doctor, what can you give me?’ ”

“Energy,” though, is a misnomer, or at least an elision. What we commonly call energy is actually our perception of the body metabolizing carbohydrates or fat as energy. Energy isn’t energy. It’s our experience of burning energy, converting it to work. It’s a metabolic mood. As Richard Maurer, a doctor in Maine who specializes in metabolic recovery, and who encountered me one day last summer as I mumbled about a shortage of it, told me, “ ‘Energy’ is a useless term. It is not the perception of stimulation. It is just the capacity to generate work. I think of it as only relating to potential. If a patient says, ‘I want more energy,’ maybe the doctor should just write a scrip for methamphetamine. But that’s false chi.”

The Fatigue Solution: How To Increase Your Energy In Eight Easy Steps

“Fatigue is the No. 1 complaint I hear from my patients and from the general public,” says Beverly Hills, Calif.-based endocrinologist and metabolic specialist Eva Cwynar, M.D., author of just released The Fatigue Solution: Increase Your Energy in Eight Easy Steps. “Women are told it’s either in their head or it’s because they’re having kids, raising kids, managing the household, working too hard or getting old. Fatigue is an illness. There are things we can do to get our energy back.”

According to Cwynar, millions of women around the world grapple with weight gain, chronic stress, poor sleep, forgetfulness, low sex drive, mood swings, hormone imbalances and constant fatigue. More often than not, they’re told: “That’s normal. You’re getting older.” It doesn’t have to be, she says.

Cwynar, who herself experienced a total lack of energy, low sex drive and poor sleep after the birth of her second child, developed a simple guide to help you figure out why you’re tired and how to get your energy back. From easy lifestyle changes to knowing what to ask your doctor, she offers these eight steps to kick fatigue for good.

“People think they are eating right, but there’s a difference between watching calories and eating for energy,” says Cwynar. Eating lots of protein is essential for staving off fatigue, especially early in the day when your cortisol levels are high. At breakfast she suggests eating eggs, having a slice of ham on the side or adding protein powder to your oatmeal. Otherwise, if you eat only carbohydrates, you’ll crash early and hard.

Cwynar also recommends eating small amounts every three to four hours to avoid over-eating at meal-time and to keep your blood sugars up in between meals. Snacks like fruit and nuts, string cheese, a couple scoops of cottage cheese or even beef jerky will satiate your hunger and boost energy levels. She recommends avoiding soy products, which act like estrogen in the body, using smaller plates, making meals beautiful with color and plating, and to try replacing grain with quinoa, a plant protein.

Cwynar says energy levels are tied to the health of your gastrointestinal tract, and if you’re frequently tired or feel bloated, you may want to get your gut in shape. A common problem she sees is “leaky gut syndrome,” which occurs when the lining of the intestines weakens so much that its contents escape to the bloodstream, causing fatigue, headaches and food sensitivities.

Luckily, there are some easy all-natural fixes. To get the body’s pH balance to equilibrium, Cwynar advises avoiding the use of aspirin, cutting out alcohol for two to four weeks, and drinking about eight glasses of water each day (0.6 ounces multiplied by your weight). Also, although diet soda doesn’t have any calories, the aspartame in it acts like “a film inside your colon,” she says. Because artificial sweetener is a pro-inflammatory, you’ll end up putting on weight. She notes that one patient lost 20 pounds in two months after cutting it from her diet.

An estimated 50 million to 70 million Americans suffer from a chronic sleep disorder. Cwynar says to get better sleep “you need to improve your bedroom hygiene.” First, get the television out of the bedroom. Studies show that even if you don’t turn it on, your brain associates the TV with stimulation. Also, forming habits is important. Go to bed and get up at the same time every day.

Some tricks: Keep the bedroom cool to help you fall asleep. Studies have found a correlation between high core body temperature and insomnia. If you have trouble falling asleep, get up and leave the room until you feel tired. Finally, “never exercise after 4 pm,” she warns. While exercise will improve your sleep, it’s better to do it earlier in the day, so that your body has time to come down.

Think you’re just too old and too tired to have sex like you once did? No way, says Cwynar– good, frequent sex is one of the best things you can do to increase your health and get rid of fatigue. “It stimulates brain function, burns calories, increases oxygenation, boosts immunity and relieves stress and depression.” If you feel you’re not as interested in it as you once were, she advises having your testosterone levels checked out, noting that, in women, testosterone boosts libido and energy.

Plus, it’s a good way to start the day. “I advocate for sex in the morning,” Cwynar says. “Most women will find an excuse at night. But if they start their day with it, from a hormonal perspective, they’ll be much more energetic. It invigorates people.”

Yeah, yeah, you’re too tired to exercise, right? Well studies show that the more you move, the more energy you’ll have. “No more excuses,” scolds Cwynar. Oftentimes, she finds that people don’t push their bodies hard enough. While it’s true that any exercise is good, try to really sweat. She recommends burst training, where you work at nearly 100% capacity for 45 seconds, rest for 90 seconds, and then repeat for 20 minutes. It helps burn fat for the next 36 hours and increases metabolism. 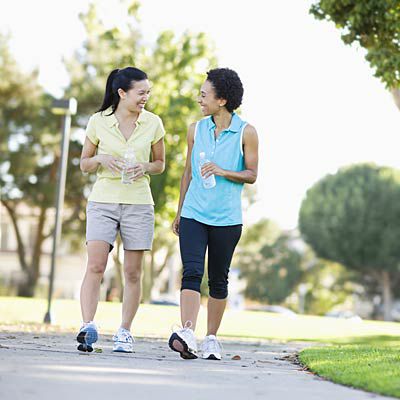 Not an a.m. exerciser? Rethink your idea of a workout. In a University of Georgia study, people who did a low-intensity aerobic activity (think a leisurely walk) three times a week had a greater reduction in fatigue levels than folks who did higher intensity workouts (like a faster-paced walk with hills) for the same amount of time.

If you tend to drag in the morning or you’re overall exhausted, a tough workout can be more draining than invigorating. “And if you’re not in top shape, a high-intensity workout forces you to expend major energy, leaving your body tired,” says exercise physiologist Michael Bracko, EdD.